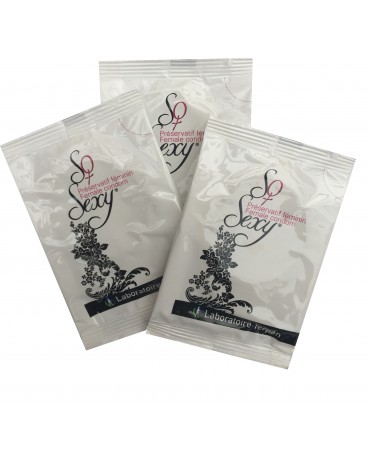 DID YOU KNOW THAT THE FEMALE CONDOM HAS BEEN IN FACT FOR MORE THAN A CENTURY?

Indeed, it was at the beginning of this century that the female condom, called "the Practice", was invented. Marketed in 1992 in the United States under the name Fémidom®, it appeared in Europe, particularly in England, a few years later thanks to the initiative of the TERPAN Laboratory.

The female condom from Astucedefemmes.com is a one-size-fits-all, hypoallergenic sheath containing 2 rings: 1 inner polyurethane ring and 1 outer nitrile ring. The inner ring is movable and not attached to the sheath. The outer ring, which is larger and thinner than the inner ring, stays outside the vagina after the condom is inserted. It holds the condom so that it covers the external genitals as well as the base of the penis during sex.

The female condom has been specifically developed to be comfortably held in place and easily removed. It is pre-lubricated with dimethicone which is an inert, non-spermicidal silicone and widely used in the medical field. The lubricant is used to make it easier to insert the condom before sex. It is placed in the vagina, in order to receive the male sex at the time of penetration.

THE FEMALE CONDOM IN 7 QUESTIONS

1. Is the female condom safe?

Answer: Yes, tests have shown that the female condom is a safe and effective method of preventing unintended pregnancy and STIs, including HIV. The condom, made from nitrile, is hypoallergenic and no side effects have been reported. It must be changed with each intercourse and between each penetration.

Answer: Just like what is new, it is necessary to acquire a little practice but practice leads to perfection! Try the female condom at least 3 times. Find a comfortable position to insert it: sitting, squatting or lying down. Both partners can insert the condom.

3. When can it be inserted?

Answer: The female condom can be inserted a few hours before (up to 8 hours) or just before sex. It does not need to be removed immediately after intercourse.

4. How do I know if the female condom is inserted correctly?

Answer: The female condom is in place if: - you feel it is comfortable, - the outer ring covers the opening of the vagina, - it lines the vaginal wall correctly.

5. Are there special cases in which the female condom cannot be used?

Answer: Overall, the female condom can be used in different positions, during menstruation, after hysterectomy or during pregnancy. You can also use it when you take the pill, if you have injections or an intrauterine device. It is even possible to urinate with this condom. Warning! It cannot be used with a diaphragm!

6. Can the female condom fit completely into the body?

7. Do you feel the inner ring during intercourse?

No customer comments for the moment.

22 other products in the same category: